The surgical stages of “Perovic Total Phalloplasty” are three.

Stage One Part A

Neophallus creation using the MLD free flap is a microsurgical procedure and involves:

General anesthesia is combined with epidural anesthesia during the 9-11 hours of surgery. (Anastomoses [plural noun]: surgical connection of hollow tubular parts or structures, such as blood vessels.)

Stage One Part B

During the pioneering years, this was done in a separate stage.

Total Phalloplasty has advanced so greatly and continually over the years that now “Part B” is done at the same time as “Part A”. In fact, it would be more accurate to describe “Part B” as Stage Two Step One.

It prepares for a long urethra that will enable patients to void from the tip of the penis — point-and-shoot capability.

When it was still called “Part B”, this first step of the urethroplasty used a buccal mucosa inlay from the mouth.

If the patient had leukoplakia or other mouth disorders, the surgeons used split-thickness skin grafts, harvesting 2-3 strips of buccal mucosa and closing the wound directly.

Grafts are transferred and quilted to the ventral side of the new penis in order to allow graft acceptance and development of its own blood vessels. At the same time, the penile remnants (natal males) or clitoris (FtM transsexual) are incorporated into the neophlallus.

The underside of the penis will not look nice and normal until Stage Two.

The patient must lay in bed for about 48 hours to protect the microsurgical anastomoses.

After that, the patient starts standing and walking.

If a buccal mucosa graft is used, it must be wetted post-operatively for 5-7 days.

The patient wears a trans-urethral catheter for approximately 5-7 days.

Total hospital stay is usually a week or less.

The surgery is followed by 3-6 months of healing and scar softening and then the person can get Stage Two.

After Total Phalloplasty Stage One (preceded by organ removal or not), it takes 2-3 days until the patient can walk unaided, 14 days until he will be able to drive and work and at least 28 days before he can resume playing sports.

This is the second-step of urethroplasty during which the neourethral plate (the entire underside of the penis that didn't look very nice) is tubularized and joined with the native urethra.

As in the past, if buccal mucosa was used to create the urethral plate, antiscar and moisturizing ointments or gels need to be applied every day after healing from Stage One and returning to Belgrade for Stage Two.

Stage Two takes about three hours and is usually performed using epidural or spinal anesthesia but general anesthesia can also be used if the patient prefers.

During recovery the patient wears a suprapubic urinary drainage catheter for about three weeks, as well as trans-neo-urethral splint (short catheter). You can begin to use the neophallus to stand and pee after that.

Possible complications include stenosis (constriction or narrowing of the opening and passageway) in about 3-5% of patients.

Most of those cases can be solved by temporary catheterization.

Approximately 5% of patients develop fistula — an unintentional passageway from the neophallus which enables leakage of bodily fluids to somewhere other than intended.

In recent years the rate has been 3% or lower.

If small, a fistula heals by itself by prolonged suprapubic drainage.

If larger, additional surgery is required.

During this surgery 3-6 months after the second stage, the penile prosthesis is implanted. 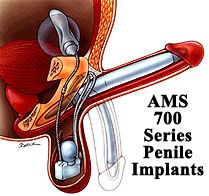 In rare cases, implantation of a malleable prosthesis is recommended for three months after the phalloplasty to prevent phallic retraction.

It can be removed and replaced later with a 3-piece inflatable prosthesis, usually an AMS 700 CX.

Patients receive treatment with a combination of several wide-spectrum antibiotics starting one day before surgery.

Surgery takes 3-4 hours and is usually performed using epidural or spinal anesthesia although general anesthesia can be used if the patient wants it.

Prosthetic rods/cylinders are enveloped in a special vascular graft to greatly decrease the chance of prosthesis protrusion.

A malleable prosthesis has a higher risk of protrusion due to the permanent pressure of prosthetic tips.

Dr Djinovic highly recommends an inflatable prosthesis such as the AMS 700 CX and always envelopes it in a vascular graft.

After surgery, the patient wears a transurethral catheter for 5-7 days.

There are three primary possible complications, including: