The major phalloplasty advances developed by the Sava Perovic Foundation have enabled the creation of a large penis (neophallus) that:

Patients can choose the penis size they want up to 7 inches (18 cm) long with a circumference up to 5.9 inches (15 cm). Much longer and much larger is possible but is usually inadvisable.

It allows “easy” urethroplasty and enables safe, effective penile prosthesis implantation regardless of whether the person chooses a big penis or average penis size. 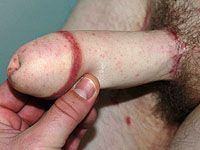 For young boys, a longer then normal penis for the particular age of a child is created because a neophallus does not follow normal genital growth in the child, only somatic growth, so must be adult-size from the start.

For decades, surgeons have been using a radial muscle from the forearm of patients to create a rather ineffective neophallus.

In some areas is it still marketed as “The Gold Standard”.

But in reality it has many serious drawbacks, including:

The goal of modern Perovic Total Phalloplasty is optimizing long-term sexual, cosmetic and voiding outcomes — a penis that looks good and works well.

For example, patients are able to urinate standing up — true point-and-shoot-like-a-fire-hose capability.

This penile reconstruction has THREE stages.

Three to six months must be allowed between the first and second stages and again between the second and third stages to allow healing and get the best possible final surgical result.

All aspects of this complex and pioneering procedure were first approved by the ethics committee of the University of Belgrade's School of Medicine.

Informed consent for the surgical treatment has always been obtained from all patients.

By early 2008, Professor Perovic and Dr Djinovic had performed this procedure on more than 80 patients.

More than than 60 of the patients were FtM transsexuals. About 25% of the men getting this procedure are NOT transsexuals. Only sometimes is this sex change surgery.

By early 2015 the surgical team had performed this surgery for several hundred people.

Total Phalloplasty is indicated in [natal] men without a penis or with a micro penis insufficient for sexual intercourse, as well as for transsexual patients.

This procedure is one of the most demanding, complex and challenging tasks in genital reconstructive surgery but the benefits for patients are great.

The creation of a new penis using the musculocutaneous latissimus dorsi flap, called the MLD flap, has achieved results significantly superior to those of most of the past century and all other comparable procedures.

The latissimus dorsi used in this phalloplasty is the broadest muscle of the back comprised of a pair of flat, triangular-shaped muscles across the middle & lower back. 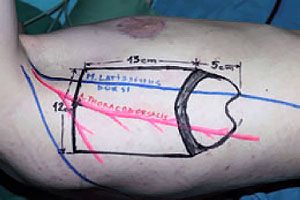 Overweight is one of the biggest obstacles to a good result. Before and after surgery, MLD tissue always reflects changes in Body Mass Index (BMI) and percentage of body fat.

The patients should not be obese in order to be able to create a normal size penis — not too thick — and they should prepare the donor area skin by intensive massage in order to increase skin elasticity and to enable us to close the donor site defect directly. The massage is best done by a professional. All skin should be treated in directions shown by the arrows on the full-screen version of the photo on the right.

This is a key part of the process. Read our advisory on donor site preparation and study the training video.

The MLD flap massage should be done at least one month before surgery. It should be superficial and involve only skin and subcutaneous tissue.

If the subcutaneous fat is thicker then 3 cm it is very hard to tubularize it and create the penis. Also that penis would be too thick for sexual intercourse. In these cases [high BMI] we advise patients to lose weight. Or, if it is difficult for them, then we advise liposuction of the donor regions 1-2 months before surgery in order to decrease its thickness.

In the “Free Flap Reconstruction of Head and Neck Defects” report of the Medical Branch Department of Otolaryngology at the University of Texas, doctors Muller, Newlands & Pou report:

Decreased flap perfusion, hypercoagulation, and impaired wound healing have been associated with smoking. Thus, smoking should be discontinued for at least one week prior to surgery and forbidden in the postoperative period. Obesity may also decrease the success of free tissue transfers the increased adipose tissue makes dissection of the vascular pedicle more difficult and interferes with the microvascular anastomosis, insetting, and flap tailoring after transfer.

Patients older then 50 with hypertension must get a color doppler of the blood vessels in the legs (femoral vessels) before surgery.

Patients are admitted to the medical facility one day before surgery for standard pre-operative analyses, diet control, and bowel preparation.

Since 1999, this plastic surgery phalloplasty has been performed successfully with a remarkable level of success.

Patients have ranged in age from 10-years-old to middle-age.

All patients have been satisfied with the function of the penile implants.

Until the present, no patients have reported any muscular weakness after surgery.

Scarring at the donor-site is directly related to the pre-operative preparation by the patient.

Poor preparation will result in a larger and much more ornate donor site wound and scarring.

Do not underestimate the important of professional massaging of the donor site by a person carefully following our teaching video about this. It is not a massage like any other massage.

If you come with poorly prepared donor tissue (both sides), the incisions and resulting scars will become more ornate and extensive. If well prepared, then the scarring is much less.

The doctor has come up with a range of highly creative solutions he uses when patients come poorly prepared. In easily understandable terms, the donor site incision evolves from:

From 1999-2009, some patients presented tremendous challenges to wound closure, particularly thin men. But most were simply very, very UNprepared.

Regardless, the doctors must always be prepared and responsibility shifted from the patient preparing for the surgery to the doctors solving the problem of unprepared patients.

The penis cannot be compromised in any way because that is the whole point of the surgery. As a result, the donor site must pay the price of unpreparedness in terms of more ornate scarring.

More than 80% of patients have been satisfied with the appearance of the area from which the MLD flap was taken.

Because all the tissues of the upper torso have relaxed and wound-tension is minimal when Stage Three is performed, donor site scar revision is sometimes done then to achieve a pencil-line scar and better aesthetics.

Hospital stay after the first stage is usually seven days or less.

Only about 7% of patients have experienced any complications.

All of which have been successfully treated with minor surgery.

One patient suffered partial flap necrosis in mid-2008 due to a unique vascular drainage problem.

The MLD flap gets an excellent blood supply because of a large and reliable subscapular artery and its two branches, the circumflex scapulae and thoracodorsal artery, as well as two concomitant veins which join to form a single large thoracodorsal vein.

Insufficient blood circulation in donor tissue makes it inappropriate for a neophallus.

At the time of flap elevation it appeared OK, but the problem started later – after surgery. It [the neophallus] was struggling for several weeks to survive which was very unusual. When a flap fails it becomes necrotic very soon after surgery, not like in his case.

Corrective surgery is done for free.

Some necrosis has occurred. A couple of flaps have failed. But all patients, 100%, have eventually received a satisfactory surgical result, even in cases where the flap failed because the patient hid pre-existing conditions from the surgeons such as sickle cell anemia.

Dr Djinovic is now able to identify insufficient vascularization immediately upon removing the MLD flap. If this is encountered, the: 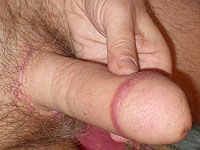 Almost all reasons for unexpected postponement of surgery are totally preventable by the patient (except insufficient vascularity):

Any of these problems would delay surgery at least six weeks or longer. In recent years, patients have come well informed and well prepared so postponement of surgery has been very rare.

Sava Perovic Foundation's high rate of success and low incidence of complications are unique and not standard for flap transfers.

Other surgeons experience a much higher rate and greater variety of complications including,:

A treatable infection after penile prosthesis implantation occurs in a small percentage of Stage Three patients.

In cases of natal male penis injury, treatment should be immediate to prevent complications caused by delay such as infection, curvature, erectile dysfunction, missed urethral injury and chronic pain.

However, severe penis injuries can be associated with injury of adjacent organs and the scrotum, pelvis and buttock so staged treatment may be recommended.

Suitable candidates for this surgery include: 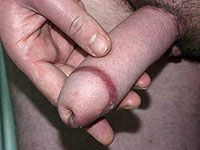 Dr Djinovic advises FtM transsexuals to be aware that:

Most of the surgeons/gynecologists who perform oophorectomy and hysterectomy do NOT perform vaginectomy because it is a risky procedure with possible bleeding and many other complications. All they do is close the vagina leaving only a small opening for drainage of its secretion. But the problem is that when persons with this are sexually aroused, they have abundant secretion and a lot of wetting. We perform vaginectomy routinely and advise it for all patients before Perovic Total Phalloplasty.

The glans is designed over the distal 5 cm of the flap.

Originally, a one centimeter wide skin strip between the future glans and penile shaft is de-epithelialized to imitate the coronal sulcus.

Glansoplasty is now usually done or further enhanced as a component of Stage Three unless the patient's requirements are not standard.

Only a small strip of muscle around the blood vessels is isolated, to decrease flap bulkiness and allow its safe tubularization.

During Stage One surgery, while one surgeon is constructing the neophallus, a second surgeon prepares the recipient site simultaneously and a third prepares the skin graft for the Stage Two Step One urethroplasty.

After surgery, the new penis is elevated off the abdominal wall for 7–10 days using a specially-constructed dressing, which is important to prevent pedicle kinking.
next:  Total Phalloplasty Stage 2