Upgrades of Meltzer or Any Other Skin and Fat FtM Penis

Dr Djinovic NEVER does groin flap phalloplasty because it does not get supreme surgical results for the patient and does NOT enable good quality of life.

Transguys who choose a skin and fat groin flap phalloplasty must:

It can never be upgraded into a Perovic Total Phalloplasty neophallus.

But we get many requests to try.

If you want a LARGE penis that can point-and-shoot pee like a fire hose AND have sex on demand for as long as you want — get ‘Perovic Total Phalloplasty’ — NOT groin flap phalloplasty.

Rather than answer any more email messages about this, we have published here the doctor's answers to all the questions we have received on this topic.

Skin and fat tissue does not allow the grafting needed to create a neourethra.

Dr Djinovic can sometimes overcome that obstacle to urethroplasty by harvesting a small amount of tissue from the person's forearm and using that as the foundation of a neourethra in a groin flap. But is that advisable? 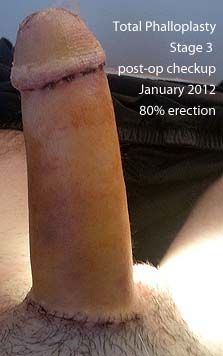 1) Exactly where on the forearm would you make the incision, such as in relation to the wrist, elbow, top, bottom?

We need to take a skin flap, not muscle. This can be done only if the person does not have a thick forearm. On the contrary — there is no place inside the penis for the flap. Ideally, and much more practical, would be to not make a urethra in the penis, but only to implant a penile prosthesis. That would be much safer. Alternatively, we can extend his urethra into the clitoris, like metoidioplasty, so he can pee in standing position (if the clitoris was preserved, of course).

2) How many centimeters long will the forearm incision be? How obvious will it be to others?

3) Any impact on muscle function of the forearm?

4) Would this urethroplasty be a single stage procedure or two stages?

It would be a single stage for urethroplasty and one more stage for the prosthesis. But, again, it is always a risky procedure for complications …

5) Does the poor vascularity of a Meltzer neophallus mean higher risk of complications than the urethroplasty of Total Phalloplasty Stage Two? If so, approximately how much greater?

Much greater, of course …

6) What are the risks? Infection? Graft failure? Necrosis? Fistula? Stricture?

7) How much is the cost of doing urethroplasty on a Meltzer neophallus?

8) How many hours of surgery?

9) How many nights in hospital?

10) How many days should the patient stay in Belgrade, excluding the arrival and departure dates?

11) The neophallus resulting from groin flap phalloplasty seems subject to shape-shifting and distortion over time because of gravity and lack of muscle tissue. For example, a bulge in the center after a couple of years that is about 15% thicker than the rest. Is stretching and distortion of this type of neophallus inevitable in most/many cases?

To some degree, but the prosthesis carries much higher risk of infection, protrusion compared to our Perovic Total Phalloplasty flap.

13) Can you improve penile shaft symmetry of a Meltzer neophallus at the same time you do urethroplasty or penile prosthesis implantation or would that increase risk to an unacceptable level?

14) How long after performing urethroplasty on a Meltzer neophallus can the patient return to get penile prosthesis implantation?

A minimum of six months.

15) Can a patient choose either a malleable or inflatable penile prosthesis or would one type be clearly more advisable for use in a Meltzer neophallus?

Inflatable is better, of course, because a malleable prosthesis makes continuous pressure and bears higher risk of protrusion.

16) How much would penile prosthesis implantation surgery cost on a Meltzer neophallus?

17) How much higher is the risk level than Perovic Total Phalloplasty Stage Three?

19) How many hours of surgery?

20) How many nights in hospital?

21) How many days should the patient stay in Belgrade, excluding the arrival and departure dates?

He should come to Belgrade for 7-10 days.

22) To what extent would your answers above apply to other groin flap phalloplasties by other surgeons?

One of the very few urologic surgeons who can create a Conjoined Bilateral Pedicled Groin Flap which he can upgrade to include urethroplasty and a penile prosthesis for sex is Dr Kim Jin Hong, MD, PhD, of the Asian division of the Sava Perovic Foundation at the Genito-Urinary Reconstructive Institute in Seoul, South Korea.